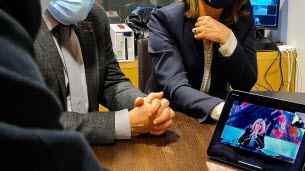 Helping children and adolescents live better hospital stays is the goal of the Yellow Pieces operation, which is launched each year by the Hospital Foundation. Brigitte Macron, who is president, was in a video conference with the representatives of the Maison du petit monde, in Bron, on Monday night. A structure that was partly financed during the construction more than ten years ago, then during the expansion of the yellow pieces. “It is a place for families with children, teenagers, but also for older people. I also saw that you had accommodated caregivers. There is a lot of flexibility in your home. For me, it’s a bit of a model, ”assured Brigitte Macron.

In Bron, Maison du petit monde, which is located a few meters from the hospital woman-mother-child, there is mainly room for relatives of hospitalized children. “There are people who come very far, 200-250 km,” recalled Professor Olivier Claris, president of the association, head of the neonatal service and president of the establishment medical commission. Structure is therefore important for relatives.

“Children heal better when their families are there”

“The idea is to recreate a family unit in the house and let them keep family referrals,” explained Vinciane Neyret, general manager of the association. Brigitte Macron has been able to discuss with several families such as these parents of a premature baby, hosted since mid-December. The little one weighed just 750g at birth. “We could not be far from our daughter. A structure like this allows us to be close. We are well surrounded, ”explained the couple who live in Isère, more than an hour from the hospital.

The house is also a plus for medical teams. “It does a lot of good for caregivers to have this device, and it contributes to the quality of care,” emphasized Bertrand Cazelles, director of the Hospitalier Est group. “Children and young people heal better when their families are there, it gives them extra motivation. We can not separate families, it is too difficult “insisted Brigitte Macron. She would like to develop this type of structure.

No piggy bank, but donations on the internet

The 32nd operation “Yellow Pieces” started on January 18 and continues until Friday the 5th. February.

Some of you may be used to collecting small coins throughout the year to fill the traditional piggy banks with “yellow coin”. With the health crisis, you will not find them at your retailers. Donations take place first on the internet.

If you still have yellow coins to give, terminals are available in Carrefour Sept-Chemins supermarkets in Vaulx-en-Velin and Carrefour Vénissieux, Joliot-Curie boulevard.

You can make a donation at www.piecesjaunes.fr or give 5 euros by sending DONATION to 92111.