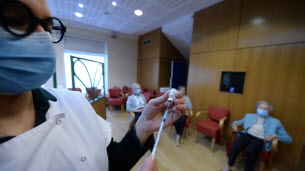 The circulation of the virus is increasing in the region in general, and in the Rhône in particular. This is the most important lesson in the latest bulletin from Public Health France which was published on Friday. The data that is communicated applies to week 3, from 18 to 24 January. In our department, the incidence is up 8% compared to last week to 232 cases per 100,000 inhabitants (234 for Metropolitan France) against 214 / 100,000. The Rhône is slightly above the regional average.

These are all indicators that show an intensification of the epidemic. Public health France is causing an “acceleration of virus circulation” in the region. Are the variants involved? Hard to say, the SPF which specified that according to a survey conducted in early January, they were responsible for 1.6% of infections in the Auvergne Rhône-Alpes. A number that will inevitably increase in the coming weeks.

More than 30,000 people in the Rhône have been vaccinated

On the hospital front, there is relative stability: visits to emergency rooms for a suspected Covid-19 have increased somewhat, hospital admissions are barely moving, but resuscitation is increasing. In the region, 3,901 patients were treated in hospitals on 3 January, including 422 in intensive care. More than 70% of admissions are 70 years or older.

On the vaccination side, despite supply difficulties and delivery delays, 132,475 people had been vaccinated in the region as of 26 January. Including 31,867 inhabitants of the Rhône.

Finally, the SPF confirms that the bar of three thousand dead was crossed last week in the Rhône. From 18 to 24 January, 77 extra deaths were registered in hospitals and 7 in nursing homes. Since the epidemic began, 3,083 people have died (2143 in hospitals and 940 in nursing homes) after receiving coronavirus in our ward. “67.4% of the people who died during hospitalization for Covid-19 were over 80 years old,” says SPF.

Note: the rectorate communicated this Friday about the health situation in the Lyon Academy. Between January 21 and 28, 323 students were identified as “confirmed cases” by Covid-19 and 35 teachers.

In Lyon VIII, the Louis-Pasteur school had to be closed this week.