A SafePal user has disclosed a horrific internet scam involving the Safepal Wallet Firefox add-on, which allegedly stole her crypto. Online scams have become rather frequent in recent years. Scammers are constantly coming up with new and inventive ways to scam the public. In some situations, they use bogus banking websites to entice internet users, while in others, they promise exceptional rewards. The Safepal Wallet Firefox add-on is the latest internet scam that targets crypto enthusiasts who use the Mozilla Firefox web browser.

Users’ e-wallets are being emptied via a Firefox add-on named “Safepal Wallet.” According to a new revelation from Bleeping Computer, this malicious add-on has been present on Mozilla’s Firefox web browser for about seven months.

SafePal is a cryptocurrency management platform that can store over 10,000 different currencies, including Bitcoin, Ethereum, and Litecoin. It is backed by Binance and is now used by over 2,000,000 people in 146 countries around the world. It appears to have been hampered by cybercriminals.

The issue was highlighted by a SafePal user Cali in Firefox support group. “Today I browsed true the add-on list of Mozilla Firefox, I was searching for Safepal wallet extension to use my cryptocurrency wallet also in the web browser. So my searching ended on the following page: https://addons.mozilla.org/nl/firefox/addon/safepal-wallet/ 22,” she wrote on the support page.

“8 hours later I checked if my funds were still safe on my phone software wallet also from Safepal I saw nothing $0, – balance I was deep in shock I saw my last transactions and saw that my funds ($4000),” she added in her post. 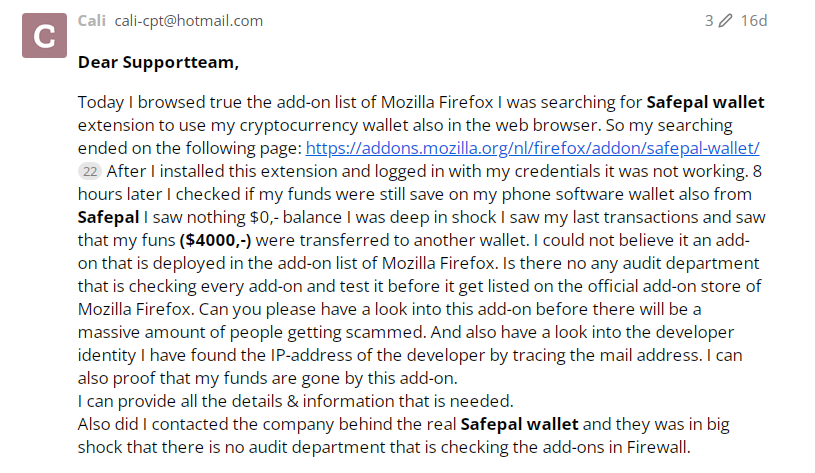 According to Bleeping Computer, in order to publish an add-on on Mozilla’s website, developers must go through an extensive submission process. The submitted add-ons are “subject to review by Mozilla at any time,” according to Firefox’s developer platform. However, what this evaluation process comprises and how carefully they are scrutinized remain unknown.

‘Safepal Wallet’ has been up since at least February 16, 2021, according to the add-on page. The 235 KB add-on is described as a Safepal application that “securely keeps private key locally,” according to the same page. It also includes product photos and marketing materials that appear to be credible.

Thankfully, Mozilla Firefox has disabled the add-on. “When we become aware of add-ons that, according to our Add-on Policies, pose a security or privacy risk, we take steps to prevent them from running in Firefox. “We took action to block and remove it from the Firefox Add-on store shortly after we became aware of potential abuse by this extension,” a Mozilla official told the publication.

Hackers steal $17,000 in a giveaway scam on Bitcoin.org

Liquid – Japan based crypto exchange lost over $90 million after hack

Beware: Hackboss disguising as hacking tool is a cryptocurrency-stealing malware