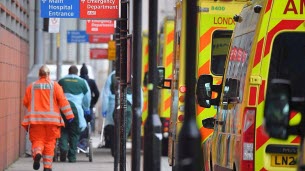 London Mayor Sadiq Khan on Friday declared a “major incident” involving a coordinated public service in the British capital, where the coronavirus is “out of control” and hospitals are at risk of being “submerged”.

“The situation in London is now critical and the virus is spreading out of control,” the Labor official said in a statement.

“We will run out of beds in the next two weeks if the spread of the virus does not slow down drastically,” he continued, urging increased support from the government.

“If we do not act immediately, our national health service could be overwhelmed and more people will die,” he added.

According to the press release, the number of pollutants exceeds 1,000 per 100,000 inhabitants in the city, where 7,034 people are currently hospitalized with Covid-19, or 35% more than during the peak of the first wave in April. Among them, 908 were placed in respiratory protection (+ 42% between 30 December and 6 January).

In the last three days, 477 people who have been tested positive have died in a London hospital.

One in 30 city dwellers is infected with the virus

“There are currently around 830 hospital admissions per day in London, up from around 500 before Christmas, and they may continue to increase over the next two weeks,” the statement said.

The medical service Health Service Journal has indicated that although the number of patients is increasing according to the most optimistic estimates, there will be a shortage of 2,000 general and intensive care beds in hospitals in London by 19 January.

On Tuesday, the National Bureau of Statistics estimated that more than 1.12 million people were infected with the virus in England last week, or one in 50 people, and even one in 30 in London.

The hardest-hit European country with more than 78,000 dead, the UK reckons with incarceration, started Wednesday in England, as well as a mass vaccination program to stop the spread of the virus.