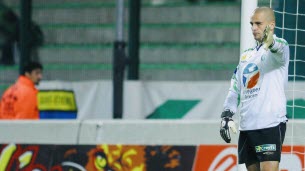 The former symbolic goalkeeper of AS Saint-Etienne (1996-2012), Jérémie Janot, is known for his humor and for being very active on social networks.

Now coaching the goalkeepers of Valenciennes, he gave his (humorous) opinion about the vaccination campaign against Covid in France: he proposes to “put the vaccine in Ricard” and open the bars again. “In a week we’re all vaccinated!” he said.

Put the vaccine in Ricard and open the rods again, in a week we will all be vaccinated! #vaccincovid

The message did not earn him the smiles of his supporters. His critics have also chambered him, and critics have come forward. Which did not affect him too much, he who is known for his freedom of speech on Twitter.

Note that another ex-keeper of ASSE (and the Olympics), Grégory Coupet, suggested (still in a humorous way) to put the vaccine … in the beer. A way to start the derby? (1)

(1) The ASSE / Olympic meeting is scheduled for 24 January.