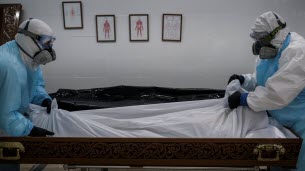 Epicenter of the coronavirus epidemic in Europe in recent days, Portugal accepted help from Germany to relieve saturated hospitals, but according to several experts, the country on Tuesday was about to reach the peak of this third wave.

The most affected country in the world in two weeks

Spared by the first wave of the pandemic, Portugal found it more difficult to control the second wave, by limiting itself to partial containment.

After easing the restrictions at Christmas and the arrival of the more contagious British variant, the epidemic eased, and the government ended up introducing a new general lock-in in mid-January, closing schools a week later.

Outside microstates, Portugal is the country in the world hardest hit by the coronavirus epidemic over a period of two weeks, in the number of deaths and new cases compared to the population of 10 million inhabitants.

The tolls since the pandemic started have exceeded the threshold for 13,000 deaths on Tuesday, including almost half since the beginning of the year.

At Santa Maria Hospital in Lisbon, one of the two largest in the country, 333 patients were treated on Monday for a total of 350 beds allocated to Covid-19 patients. But there were only six places available for intensive care.

Another hospital, serving the municipalities of Amadora and Sintra, in the suburbs of the Portuguese capital, was still in a “very complex” situation on Tuesday after experiencing chaotic days after a lack of pressure in the oxygen distribution network, too demanding.

During the incident a week earlier, the hospital had reached a record high of 363 Covid patients treated at the same time, or tripled the maximum capacity required in the contingency plan. Around 150 patients had to be ventilated using portable containers, and more than a hundred of them were quickly transferred to other hospitals, for example, the overpopulation exacerbated by crisis situations in Santa Maria, which has since set up a pre-triage system for patients.

German aid is due to arrive on Wednesday

After a January month marked by a record 303 deaths in 24 hours and photos of ambulances queuing for hours in front of the largest hospital in Lisbon, the Portuguese government had to decide to call for help.

After “several bilateral contacts”, the socialist leadership on Monday night confirmed that it had accepted the “offer of cooperation from the German government”, which will send eight doctors and qualified nursing staff on Wednesday, as well as around 150 infusion equipment and 150 medical beds. .

From Brussels, EU Commissioner for Crisis Management, Janez Lenarcic, said on Twitter on Tuesday that his services were following the “critical situation” in Portugal and were ready to come to his aid if Lisbon asked for it.

On Tuesday, the Directorate-General for Health reported less than 6,000 new cases of infection daily for the second day in a row, which had not happened since 5 January.

At the same time, the total number of hospitals admitted fell to 6,775, including 852 in intensive care.

“Portugal is now the worst country in the world, but we are already seeing positive signs,” commented virologist Pedro Simas, of the Lisbon Institute of Molecular Medicine. According to him, the country was affected by the third wave of the virus while the second had left a level of daily infection still too high.

Like him, other experts quoted in the press believed that certain regions of the country had already reached their peak of daily pollution, and that the Lisbon region would soon follow.