On Sunday, Tesla CEO, Elon Musk announced a 25% hike for the company’s premium driver assistance systems, which is marketed under the name Full Self-Driving or FSD. The price will surge to $15,000 from $12,000 from September 5 onwards, Musk informed in a tweet.

Today Tesla charges its customers US$ 12,000 upfront for FSD or US$ 199 per month on a subscription basis.

All new Tesla vehicles come with a standard drive assistance package called autopilot, which consists of features such as traffic-aware cruise control and auto steel. They depend on cameras, other senses hardware, and software to automatically keep a Tesla vehicle center in its lane and traveling at the speed of surrounding traffic. 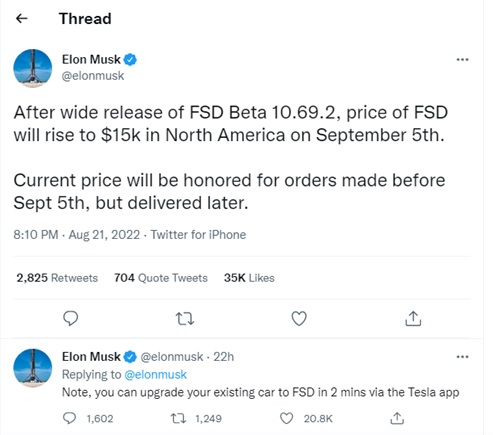 A Tesla feature called “Smart Summon” allows drivers to use a smart phone and Tesla mobile app like a remote control to call their car from across a parking lot and slowly drive, without anyone behind away, wherever they are standing.

While some FSD features are also included in a lower priced option called “Enhanced Auto Pilot” or EAP, only Tesla customers who buy or subscribe to the premium option can request access to FSD beta, an experimental version of Tesla system.

FSD beta users are supposed to obtain a high safety score from Tesla to get and maintain access to the system.

However, the company is going ahead and carrying out a limited release of the latest version of FSD beta to a relatively small pool of users, Musk tweeted on Sunday. At the Tesla 2022 annual shareholder meeting held on August 4, Musk remarked that FSD beta will be available to anyone who request it by the end of this year.

Among those who are obtaining the limited release update this week are widely followed social media influencers who sell Tesla merchandise and run ad supported videos on YouTube channels.