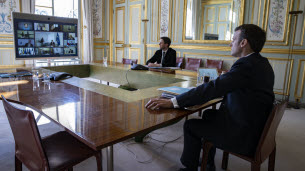 What’s going on this Thursday?

The Heads of State and Government will meet on Thursday at 18.00 at a video conference to take stock of the fight against Covid-19.

On 10 December, at the end of a long-running conflict with Poland and Hungary, the face-to-face summit in Brussels led to a unique effort for solidarity: a € 750 billion recovery plan. The atmosphere promises to be still feverish this evening.

Why this meeting is important

1 – The health situation is deteriorating almost everywhere in Europe with an increase in cases and the spread of the British variant, which is more contagious.

A thousand deaths were thus counted on Tuesday in Germany. After 70,000 pollutions in seven days, Portugal is the country in the world that now shows the most cases in relation to the population (10 million inhabitants). And France registered more than 10,000 new hospital admissions in one week.

2- This anxious context encourages Member States to increase individual health restrictions. Greece pushes the idea of ​​a European vaccination certificate, rejected by Paris and Berlin. Germany does not rule out closing borders if the partners do not harmonize their responses to protect themselves against this new epidemic outbreak.

3- The vaccination campaign, launched at the end of 2020, with its share of controversy over the lack of doses, further increases the tension.

4- Several hot files are on the table. And the twenty-five, who are fighting the coronavirus in scattered order, are again asked by Brussels to form a united front in the management of the pandemic. “This is how the EU will emerge from the crisis,” argues Margaritis Schinas, vice-president of the European Commission, when new disagreements arise.

What will European leaders discuss?

1 – To accelerate the vaccination campaign to reach 70% of the adult population vaccinated in the summer (without a specific date) in all European countries. “Of the 13 million doses delivered, only 5 have been injected,” says the leader, who has so far relied on a fixed order, for 760 million doses (BioNtech / Pfizer and Moderna). Countries are invited to exchange more about their practice to avoid “dropouts” and to step up in the discovery of the new British variant.

2 – An attempt at solidarity with European partners (Western Balkans and Africa in particular). It may take the form of a donation of 1% of the doses delivered by each of the Member States. The EU has signed six pre-reservation contracts, and finally secured the supply of a total of 2.3 billion doses.

“We will end this pandemic only when the entire world population has access to vaccines,” argued European Commission President Ursula von der Leyen. At first, the initiative could be difficult to transfer to the population, now impatient to receive the precious injection.

3- To officially start the debate on the European Vaccination Journal. The idea, which was proposed on Thursday by Athens, is cautiously supported by the European Commission. But the debate, ultra-sensitive, is far from unanimous among the twenty-seven. Paris considers it “premature” and “shocking” when the entire population does not yet have access to the vaccine.

Freedom to move on the sidelines of debates

Officially, closing the borders is not on the agenda. But the vaccine pass and the freedom (or not) to circulate that it may entail, promises bitter discussions this Thursday between the twenty-five.

In the absence of agreement on the harmonization of health restrictions, Germany threatens to restore the closure of borders within the EU. On this file, Berlin is under pressure from Bavaria and Baden-Wurtenberg (border with Alsace).

From mid-March to mid-June 2020, the free movement of European citizens had even been completely stopped in the Schengen area. “All non-essential travel should be strongly discouraged from significantly improving the epidemic situation,” the commission now asks.

Without affecting economic exchanges to ensure “the proper functioning of the internal market”. Frontier workers “can continue to do their job anyway”, reassured, Wednesday, Clément Beaune. On the other hand, the last and rare opportunities to travel in Europe risk getting another blow from the knife.