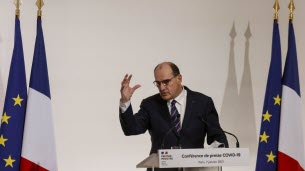 “Without question about lowering the guard”: worried about a “more fragile” health situation, threatened by the more contagious British variant, Jean Castex on Thursday night maintained all the applicable health restrictions, and showered hope on many professionals.

All establishments and equipment that are currently closed due to the coronavirus epidemic “will remain so until the end of this month”, the Prime Minister announced on Thursday night at a press conference. However, he has followed his announcements with a timetable to provide visibility to the relevant sectors. A calendar that probably needs to move, as in every step of the coronavirus epidemic.

On Sunday, ten new wards, “rather located in eastern France”, were to go under curfew from 6 pm, in addition to the fifteen wards that have already been affected since 2 January. The decision should be formalized on Friday evening, January 8. Given their incidence, equal to or greater than 200 cases per 100,000 people, the departments contacted are: Haut-Rhin, Bas-Rhin, Côte-d’Or, Yonne, Cher, l ‘Allier, Haute-Savoie, Alpes-de -Haute-Provence, Vaucluse and Bouches-du-Rhône. In addition, the curfew will be extended at 8 pm in the rest of France until 20 January.

January 18: vaccination open to anyone over 75 years of age

Vaccination against Covid begins from 18 January for people over the age of 75 outside nursing homes, who will be able to register for this vaccination from 14 January, said Minister of Health Olivier Véran on Thursday.

“If you are 75 years and older, you can make an appointment from next week to be vaccinated, and the vaccination will start on 18 January. This vaccination will necessarily be gradual, it will take several weeks as the laboratories give us the vaccine doses, “said Olivier Véran during his joint press conference with Jean Castex.

Bars and restaurants, sports halls, museums, cinemas, theaters, performance halls, sports or leisure facilities, ski resorts: Jean Castex has promised, by 20 January, a comprehensive “situation update” to examine the conditions for reopening all these closure sectors. Without specifying whether there will be meetings with professionals, a health defense council, a press conference or … all three.

In any case, January 20 is no longer an opening date, in contrast to what was announced in December for bars and restaurants in particular.

For places with culture, sports (excluding sports halls) and recreation, Jean Castex explained on Thursday that the point of January 20 will aim to “examine, depending on the health situation, whether it is possible to confirm the possibility and conditions for a resumption of activity from early February. “

February 6: Reopening of the ski lifts?

Here, too, this is just one goal declared by the government: To reopen for the start of the winter holidays the ski lifts have closed at ski resorts since the start of the season. The February holidays begin on Saturday 6 February in zone A (academies in Besançon, Bordeaux, Clermont-Ferrand, Dijon, Grenoble, Limoges, Lyon and Poitiers) and last until 8 March (zone B).

“I know how much elected officials and professionals need visibility, especially about the opportunity to open during the February holidays. It is important. It is a goal we can set ourselves, but it would be too early to make a decision today.” hui, “said Jean Castex Thursday night.

Mid-February “a minimum”: around bars and restaurants?

For restaurateurs, cafes and owners of sports halls, “the reopening in January is not realistic and will already be postponed at least until February”, the Prime Minister detailed yesterday. A date that has already been postponed many times … Bars and restaurants have been closed all over France since October 30 during the general reconstruction. This again makes at least three and a half months of stops (excluding take-away or delivery), after two and a half months during the first detention, from March 14 to June 2, without counting the local curfews this fall , as in Paris and Marseille.