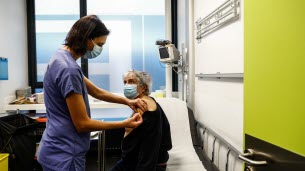 From Monday, caregivers from the age of 50 can start being vaccinated, and Olivier Véran has arrived for several weeks. Some did not even wait for this date: at the Hôtel-Dieu in Paris and in Nancy CHRU, the first injections were given this weekend.

11:40: The holiday season has passed, the government has its eyes peeked at health data, and is looking for a possible epidemic rebound as an admission to new restrictions and probable maintenance of the closure of bars and restaurants after 20 January

Strongly criticized for the very modest number of vaccines administered in comparison with other European countries, the executive reiterates that it works hard. In Le Parisien dimanche, government spokesman Gabriel Attal announces an acceleration in the arrival of doses each week and a strengthening of the funds to transfer them to nursing homes.

10.30: Extension of containment in Greece

Greece extends its strict containment until January 10: non-essential travel is prohibited, shops closed except grocery stores and pharmacies.
The country’s epidemiological situation “will be reassessed during the second week of January,” said spokesman Stelios Petsas.

9.45: 48 Frenchmen who went skiing in Switzerland, sat in isolation

On Saturday, gendarmes, border police and customs officers were present at the border post La Ferrière-sous-Jougne for checks aimed at skiers returning from Switzerland. Without a PCR test in their possession, the people are forced into isolation for seven days. 48 prefecture decrees were taken in this direction, says the Republican East.

9:24: The Lagardère group receives a loan guaranteed by the state of 465 million euros

The Lagardère group, whose turnover has been hit by the health crisis and the controversial management, received a government-guaranteed loan of 465 million euros, according to the Official Journal on Sunday.
The group, led by Arnaud Lagardère and owner of the publishing house Hachette, the Relay stores and even media Europe 1, Paris Match and Journal du Dimanche, had sales down 38% for the third quarter.

8:54: Elisabeth Borne announces expansion of assistance for youth work in light of the crisis

Minister of Labor Élisabeth Borne announces the extension of support for the employment of young people in the operation “a young person, a solution”, beyond the end of January, in the Sunday Journal.
“The health situation will remain difficult in the coming weeks and will lead us to extend (…) the bonus of 4000 euros (per year) for employment, on a fixed-term contract of more than three months or on a CDI on a youth under 26 years and 5,000 or 8,000 euros in support of an apprenticeship or professionalization contract, the Minister assures.

8:10: Italy does not open its ski resorts unlike Andorra

Italy gave up on Saturday to open the ski resorts as planned from next week. “It turns out that the conditions are not right,” the authorities admitted.

In Andorra, on the other hand, has chosen to open the stations, but only for the inhabitants.

The government of Zimbabwe, a landlocked south of Africa, ordered a new national lockdown on Saturday night, with immediate effect.

Well-known American journalist Larry King has been given Covid-19 and has been hospitalized for more than a week in Los Angeles, CNN, the American TV channel he served for 25 years, announced on Saturday.
Larry King, 87, suffers from type 2 diabetes and has experienced a number of medical problems, including several heart attacks, lung cancer and angina, a disease caused by reduced blood flow to the heart.
He is one of the most influential figures in the history of American television.

In Gibraltar, a new two-week detention has been introduced since Saturday, due to a doubling of the cases in one month as the new variant of the virus identified in the UK is suspected.
“The behavior of the virus, with such high levels of pollution, suggests that we are dealing with the new, more contagious variant,” said Prime Minister Fabian Picardo.

The outbreak of the epidemic shows no signs of slowing down in the United States, the most abandoned country in the world with almost 350,000 dead.
The first world power had reached the mark with 10 million cases that were discovered on November 9, and the frequency of new infections has run since, until Friday passed the threshold of 20 million. A new daily record for pollution (277,346) was reached on Saturday, according to Johns Hopkins University.
This spectacular rebound in the epidemic since the fall has been exacerbated by the journey of millions of Americans to the big Thanksgiving family celebration in late November and the end of the year, despite government calls to stay home.

India has approved two vaccines against Covid-19, one developed by the AstraZeneca laboratory and the University of Oxford and the other by the Indian pharmaceutical company Bharat Biotech, the regulatory authority announced on Sunday. medicines in the country.
Both vaccines “are approved for limited use in emergency situations,” India’s drug genes, VG Somani, told a briefing. This decision will allow the start of a massive vaccination campaign in this country with 1.3 billion inhabitants, where coronavirus has infected more than 10.3 million people and killed almost 150,000 people.

06:50: The slowness of the vaccination campaign criticized

In France, the slowness of the vaccination process continues to intimidate healthcare professionals.

“The entire health care system does not understand why there is such a gap with Germany: Germany vaccinates 20,000 people per day, we are 50 people vaccinated per day”, condemned on Saturday on BFMTV-prof. Mehdi Mejdoubi, from Valenciennes Hospital Center (north).

“There is a differential of hundreds of thousands of doses between France and the other countries. I am ashamed of my country this evening. We have certainly not taken into account past mistakes, for example with masks. Communication is irregular. The problem is that it is a race for life, it is necessary to go there now, it is necessary to stop laughing and vaccinate “sorry” on France info Jérôme Marty, general practitioner and president of the union French for free medicine.

In Lebanon, the annual celebration has caused a sharp increase in pollution and a virtual saturation of hospitals. “Patients line up in the emergency room while waiting for a bed,” lamented “the president of the private hospital association, Sleiman Haroun.

In the face of this situation, which is considered “catastrophic”, the National Committee to Combat Covid-19 has recommended a new detention for three weeks.

6.45: Tightening of restrictions in Europe against coronavirus, concern in Denmark, catastrophic situation in Lebanon, explosion of cases in the UK … Follow the development of the pandemic in France and around the world this Sunday 3 January.

06:40: Hello everyone and welcome to this live video dedicated to the coronavirus epidemic.