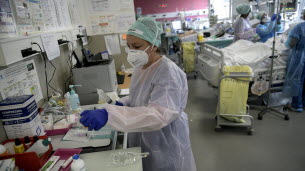 Due to a large number of returns (68 in 24 hours) and deaths (12), the number of hospital patients continues to decline. It amounted to 928 patients on Tuesday (-21) despite 63 new admissions, but 128 patients (-3) are still admitted to the intensive care unit, including 12 new patients. Since March 1, 1,975 patients have died in hospitals and 9,303 have returned home.

At Hospices Civils de Lyon, the total number of hospitalized patients also continues with a downward trend of 299 patients on 12 January at noon (-19) thanks to the reduction in the number of patients admitted to medicine (163 or 17 fewer in one week). Because the number of patients increases in the follow-up and rehabilitation care (+5 or 71 on 12 January) and remains the same – 65 patients – in the intensive care units where the discharges balance the entries for several days. .

The number of beds opened in intensive care thus remains unchanged (180 against 139 in the beginning and 277 at the top of the 2nd wave), but while the total occupancy rate increased after the Christmas holidays (95% against 84.4% on 5 January), the occupancy of Covid decreased + patients (38% compared to 42.8% on 5 January).