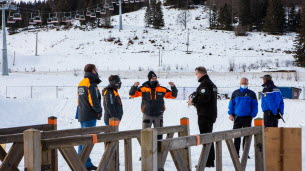 We are no longer close to the diplomatic event, we are right about it! Following the decision of the prefecture of Jura to extend the decree banning the use of the Dappes car park, which consequently prevents the Swiss from skiing on Dôle, which is at their home, the latter has just lifted yours. Via the Nyon region who wrote to prefect David Philot, without getting a response at the moment, according to AFP.

This letter was sent on 21 January requesting a “dialogue as soon as possible” to discuss solutions and “financial compensation” for Télé-Dôle.

On the other hand, the private company Télé-Dôle brought two actions before the Besançon Administrative Court: a temporary suspension and a request for cancellation. A hearing is scheduled for February 1. What is the reaction on the French side? A priori, the prefecture certainly does not envisage the reopening of the Dappes car park “given the health situation in which the Law Department is located”. The distance has only just begun.