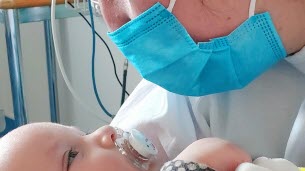 Lou and Elena were born on June 11, 2020. The twins are happy parents Marion Sommier and Gregory Coston. The small family lives in Saugues. And then everything changes on October 11, when a doctor reveals to them the most feared diagnosis. Elena shows signs of acute B-lymphoblastic leukemia. “We get to know 70% risk of death; and we are told to say goodbye to him, ”the young mother continues to tremble.

A few weeks earlier, Marion Sommier and Grégory Coston had discovered bruises on Elena’s stomach. “As long as it went we went to the emergency department in Puy-en-Velay where we were told about a dry skin. Instinctively, I knew it was not. The following week we returned to the hospital because bruises appeared on our skulls. Doctors insist on diagnosing skin disease. Elena later caught a cold, she was very tired. We thought it would work. And so, no ”.

Marion Sommier remembers the emergencies. This time, Elena is hospitalized. That same evening, the results of the blood test confirmed the young mother’s concerns: “I collapsed in tears. Elena had a hemoglobin level of 3.5. I heard: “vital emergency protocol to Clermont-Ferrand”. And then nothing. I was stunned ”.

The baby is taken by ambulance to Clermont-Ferrand. Five days later, Marion Sommier and Grégory Coston are informed that Lou is also ill. “It simply came to our notice then. She had a pretty rosy skin color ”. The case of twins under one year, who also suffer from acute B-lymphoblastic leukemia, will be the second in France.

On chemotherapy courses for several months

Babies get chemotherapy right away. Too small and too fragile to withstand an hour and a half journey between Clermont Hospital and the house in Saugues, the babies are being monitored at the hospital. Elena had a peak of fever after leaving the first course of chemotherapy; we had to return to intensive care. We can not take the risk that this will happen more than 100 km away. “

So the parents also moved to a house near the hospital. Due to the Covid-19 health crisis, only one person has a permit per room. Marion Sommier and Grégory Coston take turns with their daughters.

“It is difficult to be in the hospital all day, and never alone. Between the doctors, the nurses, the auxiliary nurses, the physiotherapist, the facilitator, there are many people who come into the room all day. We have the impression of having lost our parental role a bit, Marion apologizes.

For their first Christmas, Lou and Elena were reunited for ten minutes after two months of separation. Last week, they managed to reunite: “We see that they are really better when they are together. They reconnect. This reunion is good for all of us ”.

Elena can have a transplant in March. “Right now it’s full of question marks in our lives. We are told to be patient ”.

To follow the family: The Facebook page of “Lou and Elena at 4 months: their fight”. To make a donation: on halloasso.

At PEM in Saugues, employees donate the days off

Grégory Coston and Marion Sommier have both stopped working to stay with their babies at the hospital. He’s a drywall, she’s a metrologist. At PEM (electrolytic protection of metals) in Saugues, Marion’s colleagues have given up days off to donate them.

The company has 187 employees. “When my maternity leave ended on December 17, I was worried. The financial aspect is a problem when you stop working to stay with your sick children. My colleagues gave me 142 days off. My employer offered me 25 days of paid vacation and 7 days of RTT. If I take leave, it will take me to October 2021. A real relief, ”testifies the young mother.

An entire chain of solidarity has been created with donations from Children’s Dreams in Langogne, from the Agir Association in Saint-Etienne; du Gaec from the farm Chirac in Chanteuges. In Saugues, Crédit Agricole has made a donation box available. Among others.