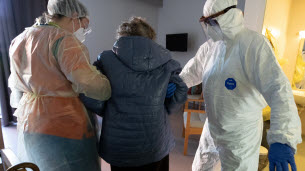 Two thirds of the inhabitants of a retirement home in Belgium in Houthulst, West Flanders, as well as several inhabitants of this city have been infected with the British variant of coronavirus in recent weeks.

Nearly 120 people in the nursing home are believed to have been infected with the new British variant.

According to local mayor Joris Hindfriyckx, the situation is changing hour by hour.

The number of pollutants grew rapidly last week in this city in West Flanders.

“We are really facing a strain whose pollution is very important, to affect so many people at once,” said Dr. Yves Coppieters, “and then this strain has been circulating among us for some time probably to spread in this way.” Confirmed by infectious specialists Leila Belkhir: “We suspected that the British variant was already circulating, and the more we look, the more we will find.”

“There is an urgent need to act”

In any case, Yves Coppieters is categorical: it is absolutely necessary to expand screening around this cluster as much as possible. “There is an urgent need to act on a very massive testing of all the contacts to this nursing home, but not just to the entire population around this nursing home, to all the families, to all the staff contacts. You really have to try to assemble the transmission chains, and that these “People, even if they are at lower risk, put themselves in strict isolation. I think that is the key if we want to limit transfers.”

More announcements of this type in the next few days

For the epidemiologist, we must expect more announcements of this type in the coming days. “If there is a cluster of such intensity, there will certainly be others. I think testing population groups would be very interesting, it has never really been done.”

Strengthening quarantine controls in the municipality

An appeal for reinforcement has been launched to deal with this situation. Note that some of the inhabitants of the city have been polluted for a few days: 8 two weeks ago, 40 Fridays, 85 now. The police have stepped up their quarantine, extended there to ten days.

As a precaution, the city had already decided to ban all social activities.

Only schools, childcare and medical services are open for now. “The origin of the infection is not yet known, but we are busy tracing the contacts,” said the mayor. “The infected must be quarantined for ten days instead of the seven required for a ‘normal’ infection.”

So far, says the mayor, there is no information on how the virus managed to get into the rest of the home, none of the staff have stayed in the UK recently.