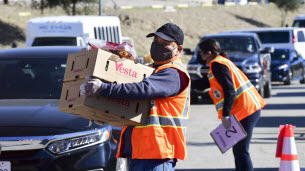 Joe Biden will tackle this Friday one of the most visible effects of the economic crisis caused by the pandemic by promising immediate help to the millions of unemployed Americans who are hungry and crowding the food banks.

In anticipation of the vote in Congress on the $ 1.9 trillion giant emergency relief plan for the economy unveiled last week, the Democrat will take two decrees: the first to increase food aid in the country to meet the worst crisis of modern times, the second to strengthen the social rights of federal agents.

In the United States, where schools provide daily meals for students from poor families, 12 million children do not have enough to eat either.

In cities, queues for soup kitchens have grown and food banks are overwhelmed, including in affluent suburbs of the federal capital, Washington.