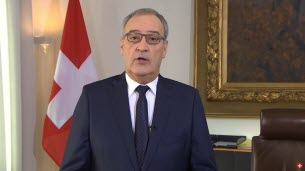 “Realist”, Guy Parmelin had banned himself “to form overly enthusiastic wishes” January 1, the day of his accession to the Swiss presidency. This Sunday, the new president, who succeeds Simonetta Sommaruga, goes further by acknowledging mistakes in the management of the pandemic, in an interview with the Sunday newspaper SonntagsBlick. “Between July and September, we underestimated the situation,” he said in the Sunday newspaper. “We thought we could control the virus”, but the authorities “were far from it”.

Guy Parmelin, who has been president for one year, was already in 2020 the Federal Councilor with responsibility for the economy and therefore played an important role in managing the health crisis.

Around one hundred deaths daily in Switzerland

Switzerland experienced a relatively moderate first wave compared to the violence that the pandemic hit its European neighbors, but since the autumn, the country has experienced a very strong second wave. For several weeks, the country with 8.6 million inhabitants has shown more than 4,000 new infections a day and a hundred deaths daily. Vaccinations have started in several cantons in the country, but at a still slow pace, as in France. Moreover, here as elsewhere in Europe, the British variant – more contagious – of the new coronavirus has been detected at least five times.

Guy Parmelin, a member of the right-wing populist UDC party, stressed that coordination with the cantons, which take most of the responsibility for dealing with the health crisis, “is not always easy”. The Federal Council has sometimes had to take matters into its own hands to coordinate the fight against the disease.

These difficulties were illustrated in December 2020 when the Federal Council wanted to introduce new measures to try to stop the infections that ran. The French-speaking cantons complained that their efforts in previous weeks were not recognized against the German-speaking cantons, where the epidemic started again. A compromise has been found, but the effectiveness of the measures or failures will not be known until after the holiday.

“The actions that have been taken have always been a balance of interests between health, finances and the people’s psyche. It is not completely black or completely white, ”remarks Mr. Parmelin. He also says that the Federal Council has noticed the latest warnings from researchers, who especially fear a third wave, as hospitals are close to saturation. “These analyzes are part of the role of researchers and specialists,” Parmelin adds, but “it is the role of politics to decide.”