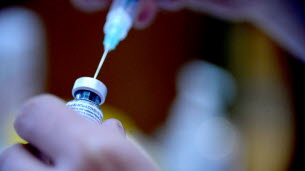 Vaccines are saturated, tracks are already reserved, the phone rings in the void … Less than a week after the opening of the vaccination for everyone over the age of 75, the agreement to receive the serum has become an obstacle course in our region.

In the Rhône, of the 17 vaccination centers already in place, only one, on Thursday morning, offered appointments on Doctolib for a first injection of the Pfizer vaccine. In the Loire (6 centers), Ain (3 centers) or Jura (10 centers) it was no longer possible to find a niche. Only the Haute-Loire still had … three tracks available.

The deadlines have not exploded, they have simply disappeared. On the messages dedicated to Fleyriat Hospital, near Bourg-en-Bresse, most patients will be entitled to a brief description “We invite you to renew your call later”. In the Loire, all vaccination centers now refer to a single number … that does not ring. The same radio silence in the center of the Jura and the Rhône.

Faced with this unexpected rush, the Minister of Health has promised to establish a waiting list soon. When contacted, the regional health agency did not tell us when. In the meantime, it is still possible to contact your town hall, call the national number (0 800 009 110) or look for the opening of new centers and new slot machines every day …

With doses coming in dropper form, the vaccination plan presented by the government therefore boils down to a theoretical exercise. What about in practice? When can you actually be vaccinated, depending on your age and profile? Let’s try to clarify this.

If you are over 75 years old

At the beginning of January, the controversy had come to a head with the launch of the vaccination campaign, which was considered laborious and too slow. The government responded by gradually expanding, and faster than expected, the list of the public that is likely to be vaccinated from January.

In total, therefore, around 7.85 million people require, or 15.7 million doses, since the available vaccines initially require two injections. The problem is, at the end of February, France will only have 10.8 million doses at best: it is not known on what exact date the delay in delivery of Pfizer last week will be compensated, and the AstraZeneca laboratory, which will have to deliver 5 million doses in February, has not yet received the blank check from the health authorities.

More than half of people over the age of 75 who are not residents of nursing homes have to wait until March. Although we extend the time between the two injections beyond the recommended three weeks, the gap between the target and the number of ammunition is very clear. The Minister of Health has also noticed this shift since he now mentions the date of the beginning of April for the end of this first phase.

Meanwhile, in late February-early March, the second phase of vaccination will have begun. People between 65 and 75 (7.5 million people), as well as teachers (around 870,000 people), will again be able to make an agreement, at least on paper.

If we add approx. 2.45 million people over the age of 75 who could not be vaccinated in February, when we reach 10.82 million people affected, or 21.64 million doses needed in March. Against expected deliveries of … 10.7 million doses. Very far from the account.

It is clear that the vaccination of the elderly will be completed during the month (once again, if the AstraZeneca laboratory is allowed to deliver its 4 million doses scheduled for March). But that of the piece below should hardly begin.

Can we hope to have vaccinated all these little people by the end of April? Yes … if the other labs follow. Theoretically, 15.5 million doses are expected this month, but 4 come from AstraZeneca, 2 from the Curevac laboratory, quite discreetly until then, and 3 from Janssen / Johnson & Johnson. The latter announced delays in the test protocols, and we can undoubtedly set aside deliveries in April.

In total, 12 million doses in April in a moderately optimistic scenario, for around 10.94 million doses needed. It is therefore playable, although it is likely that with the delay between two injections, we will overflow in May.

What about the others?

Here we enter the realm of science fiction, with four major unknowns: the famous marketing authorization for AstraZeneca’s vaccine (which must increase deliveries significantly from May), delivery of the CureVac solution quite mysteriously (the EU Commission had to publish some of the contracts that were signed with this German laboratory in an attempt to remove doubt), the duration of the delay to Janssen / J & J and a possible increase in doses provided by Pfizer.

The latter may actually provide 11 million extra doses in the second quarter of 2020. But a good deal is the result of a small wrist: thanks to a statement from the European Medicines Agency, the US laboratory now estimates that the vials contain six and no longer five doses. However, this only applies if we have the right equipment, which is far from the case for all our pharmacies. So be careful …

Prior to this announcement, 40 million doses were expected in May and June alone, including 15 from AstraZeneca, 4 from CureVac and 5 from J&J. The latter vaccine is all the more important as it is delivered in a single injection, and therefore requires half of the doses …

However, there are around 35 million extra French people, aged 19 to 65 (minors are not worried at the moment), who need to be vaccinated, theoretically from April, probably from May to most.

At best, if J&J makes up for the possible delay in April and Pfizer’s announcement goes through, 31.5 million of us could be vaccinated with other trimester doses (with a new injection in July for a good portion of the population).

But if J&J fails and the sixth dose turns out to be a mirage, we will fall to 18 million people, roughly the only population aged 45 to 65.

In any case, the pace seems largely sufficient to avoid a new wave in hospitals next autumn, unless a new variant should resist vaccines.

In March and April (or even May …), on the other hand, vaccines will certainly not be enough to get out of the crisis. With or without a sixth dose.