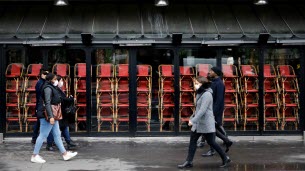 What to know this Sunday morning

From this Sunday, France will close its borders with countries outside the EU, “unless there is a compelling reason”, to try to curb the spread of the epidemic. At the same time, the government has decided to close shopping centers that are not foodstuffs of more than 20,000 m2 from this Sunday and strengthen attendance in all supermarkets.

– Emmanuel Macron spoke in a tweet this Saturday. “I have confidence in ourselves. The hours we live are crucial. Let’s do everything we can to curb the epidemic,” he said.

– The pandemic has killed more than 2.2 million people worldwide since the end of December 2019. More than 102 million cases of infection have been diagnosed.

Algeria launched its vaccination campaign on Saturday in the city of Blida (center) with the Russian vaccine Sputnik V, according to the official Algerian agency APS. Algeria (44 million inhabitants) will also receive the first doses of the British vaccine AstraZeneca / Oxford this Sunday, just like Egypt (100 million inhabitants). The latter country has already started its vaccination campaign with the Chinese Sinopharm vaccine.