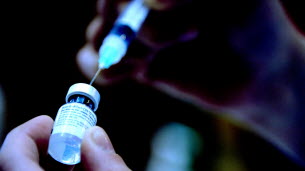 “All French people who want it” will have access to a vaccine by the end of the summer, Emmanuel Macron promised earlier this week. Meanwhile, due to a lack of stock, the vaccination is in small doses, with just over 1.5 million French people already receiving the first injection in early February.

But this figure, which is now reported every night by Public Health France, actually hides significant regional disparities. While the Burgundy-Franche-Comté, worn by the Jura, is a model student, the Auvergne-Rhône-Alpes region follows with difficulties from behind in class.

The graph below shows the proportion of the population in each region that has already received at least one dose. The month of February can hardly change the situation, since it will be partly devoted to other injections.

How to explain these rhythm differences?

To distribute the doses across the country, the Ministry of Health is dependent on two indicators. On the one hand, with regard to the Pfizer vaccine, the number of priority people in this first phase, ie those over 75 and healthcare professionals over 50 years.

With more than 11% of the population already blowing out its 75 candles, Burgundy-Franche-Comté is thus logically advantageous. But it does it better than regions that are even more gray (Paca, Nouvelle-Aquitaine, Corsica).

Conversely, the Auvergne-Rhône-Alpes (9.6% over 75 years) are far behind regions that are barely “older” than it (Grand Est, Pays de la Loire and above all Normandy). The fourth age is not everything.

The modern vaccine is reserved for the most affected regions

The second criterion mobilized by the authorities is the health situation. Thought at the beginning of January, the distribution thus leans to the east, where the epidemic was then much more virulent.

The Moderna vaccine, available in small quantities, is thus reserved for the Grand Est, Burgundy-Franche-Comté and the Paca region. Here, too, we understand the progress of the Francs-Comtois and the Burgundians, but not the delay in the Auvergne-Rhône-Alpes, especially towards the western regions of the country.

What is stuck then? Beyond the main lines in Paris, how are the doses actually delivered to us?

When asked by CheckNews (paid link), the Directorate-General for Health explains that deliveries follow two main routes:
– on the one hand, nursing homes and long-term care units outside hospitals and private individuals are provided directly;
– at the other, so-called “pivot” institutions, equipped with super-freezers (required for the Pfizer vaccine), are delivered and responsible for distributing the doses between public nursing homes and vaccination centers, according to ward allocations, reception capacity agreements made and consent given (on nursing home).

So lack of super freezers, low demand from priority audiences or coordination problems? Contacted on several occasions, the regional health agency botte a touch. The ministry, him, returns the ball to the territories: “The state plays its role, initiates its distribution of doses, etc. So, which falls within local freedom, one explained in mid-January during a press conference phone forwarded by Ouest-France. The local actors. must take these doses and set up vaccination solutions at the local level. “

If we reduce the numbers above to the population of each ward, the frequency of vaccinated persons (at least one dose) reaches almost 5% in the Jura and 3.5% in the Haute-Loire, but painfully exceeds the 2% in the Loire and Rhône and. .. 1.5% and Ain.

With a countdown of doses (we are not expected to exceed 2.5 million French first vaccinated at the end of February), the ignition delay currently has only limited consequences. But this should not be repeated when deliveries become more massive: between the vaccine and the variants, a much larger race plays out.