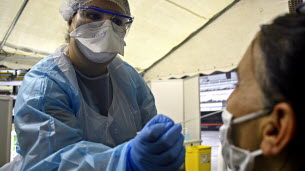 We’re a little used to it. In each city council, the feud over anti-covid screening between the city of Lyon and the region, and by extension between their representative, Mayor Grégory Doucet and President Laurent Wauquiez, is invited to the debate.

This Thursday, it is through a reaction from the opposition’s municipal council (right center and independent group), Françoise Blanc, that Grégory Doucet reacted once again. The latter had just criticized him for the central town hall having refused him four computers and two printers to set up the screening center which was opened by the region in the 6th arrondissement, at the time of the high season, like everywhere else. in the Auvergne-Rhône-Alpes region. An operation that, for the sake of order, had left Grégory Doucet skeptical, and preferred screening after the holidays.

Stung to the heart, the first judge replied that it was inappropriate for the regional election campaign to invite to the debate in this municipal council, and that it had been necessary to “wait for Christmas to come to the region waking up.”. Understand that the city of Lyon had installed its first screening centers by the end of the summer.

And to add, still considering the controversy over the massive screenings he would have promised after the holidays and which would never have happened: “It was never my intention to start massive screenings after the holidays, but targeted screening. This is what we “Currently doing in the 8th and 9th arrondissements with our targeted screening centers, and which we are going to do with students. This tells us about the circulation of the virus and about what measures are to be taken.”

Françoise Blanc replied: “You do not have the monopoly of the heart, and for me I am far from going into an overview of a regional campaign where I am not involved, I have also mentioned it. But health has been a part of my life, and you will find me on the subject, in opposition to you, as soon as I consider it necessary ”.