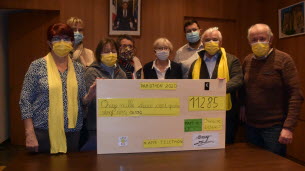 Despite the cancellation of many events, a takeaway sale took place on Place des Franchises during the farmer’s market in favor of AFM Telethon.

Christian Lareure and Monique Servagent thanked Presidents David Da Costa without anything being possible. This chef, forced to close his restaurant, put his energy into cooking the potato ham on a voluntary basis. Boulangera was also thanked g. This whole chain of solidarity raised the sum of 11 285 euros. A great performance that pleased Christian Bas, coordinator of the Loire Nord Téléthon. “I would never have imagined such a great result given the conditions under which the gatherings took place. The students at Chervé High School also contributed a check for 2,307 euros.