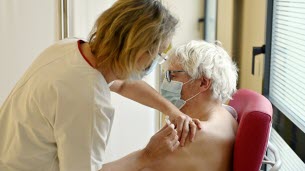 The vaccination campaign, which started on Monday, will involve twenty pilot facilities in Burgundy’s Franche-Comté, where the vaccine will be offered to residents and employees at risk.

At least one vaccination center per ward

“In response to a request from the President of the Republic, the government has decided to accelerate and immediately open the vaccination campaign for health professionals over the age of 50 or with comorbidities,” the agency added. regional health (ARS). By specifying: “From this week, at least one center per ward will offer them vaccinations, ie at least eight locations in Burgundy Franche-Comté. “

After this first phase, which is reserved for older people in institutions and caregivers at risk, the second (from February) will concern people over 75 and then people over 65, and carers over 50 or with comorbidities. Steps 3, 4 and 5 then gradually extend to the entire population.

Over the next few days, the region will have more than 50,000 doses of vaccines, and each department will have at least 5,000. Since then, almost 7,000 are already available.

The vaccines are stored at nine hospitals in the region: the CHU in Besançon, the one in Dijon, the North Franche-Comté hospital, as well as the hospitals in Lons-le-Saunier, Vesoul, Chalon, Mâcon, Auxerre and Nevers.

In the case of nursing home residents and employees, vaccines are delivered from one of the nine mentioned hospital storage locations, and the private companies are delivered through their reference city pharmacy.

As for the other health professionals, they will be vaccinated either during campaigns organized in the establishment or by going to a vaccination center.

And in the future? “As soon as a vaccine is compatible with the classic distribution circuit in the city, this channel will be the privileged channel for vaccinating the population. This is not possible so far because the only available vaccine imposes restrictions that are incompatible with this circuit (storage at -80 ° C, packaging in 5 doses). “

Blacé / Arnas: the director of the Courajod and Château du Loup nursing homes was transferred