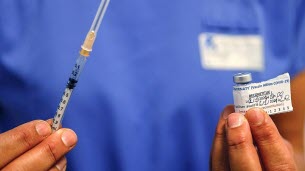 When asked about BFMTV on Sunday night, Arnaud Fontanet, epidemiologist and member of the Scientific Council, returned to France’s vaccine strategy while the controversy grows around the slowness of the fight.

Efficiency over the next three months

“The effectiveness of the vaccination campaign will be assessed over the next three months, this is where we will see if the operation is a success” indicated Arnaud Fontanet and set a first target of 5 to 10 million people vaccinated here at the end of March to see a first effect on the circulation of the virus.

“The vaccine will only start to take effect in three months, and here we have three difficult months,” insisted Arnaud Fontanet, hoping that the restrictive measures would no longer be necessary “in the autumn of 2021”.

Will we get enough doses in three months?

“My concern is not so much the first few weeks, my concern is that we are facing a worldwide demand for these significant vaccines,” the Scientific Council member continued: “In three months we will have adequate doses for Europe and the rest of the world. the world? “.