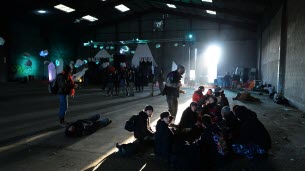 Last night from Friday to Saturday in Brittany, the sound of techno that had been ringing since Thursday night in two sheds turned into a wild nightclub, quiet. Starting at. At 05:30 the parties began to leave this village in the countryside in Breton, and at 10.15 the place was under police control, the prefect explained to Ille-et-Vilaine. The party lasted for 36 hours.

On a Sunday question by the daily Ouest France, one of the organizers said “to assume” although the Regional Health Agency (ARS) is concerned and has invited festival goers to isolate themselves in the next few days.

The organizers also prepared the long-standing event “forgetting coronavirus, confinement, curfew”. “We are tired of this world spinning, from left to right. We want it to change. We must do everything to move forward. We have been preparing this meeting for two to three months. Because we need this. We “We knew all this shit. We knew it was against the rules, but we wanted to do it no matter the consequences. We do not regret anything if it were done, we would do it again,” the organizer explains to Ouest France.

And to continue: “We understand very well that this can be shocking. I would still say that it was all that was needed. We had planned masks, frost. But after the response with the police, people said to each other, we are full, we want to show that we are here. We just want to party, even though we know it’s not good. Coviden is what happens because of those who do their experiments. By playing with microbes … “

According to a tweet from Interior Minister Gérald Darmanin, the gendarmes established 1225 Covid offenses (mask-collection-curfew) + 420 different offenses, including 225 related to drugs.

“The collected items made it possible to confirm the nature paid for the event in the form of a contribution and the significant presence of drug products on the occasion of this incident,” explained in a statement the public prosecutor in Rennes Philippe Astruc.

The investigation focused on identifying the organizers, the prosecutor said. An intervention took place this Saturday at 3 pm in Iffendic (Ille-et-Vilaine) and two people, born in 1998, without a criminal record, were arrested and taken into police custody.