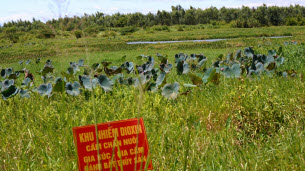 It is before a French court that the crime against ecoside can be recognized at an international level. This Monday, more than a dozen agrochemical companies, including Bayer-Monsanto, will appear in court in Evry, Essonne, on “Agent Orange”, this ultra-toxic herbicide spilled abundantly on Vietnamese forests during the war (1955-1975). And this thanks to the initiative of a French-Vietnamese.

Tran To Nga, born in 1942 in French Indochina, was engaged during the conflict in the Northern camp. However, between 1961 and 1971, the U.S. Army spread millions of gallons of highly toxic degreasing agent containing “Agent Orange” on the Vietnamese and Laotian forests to prevent the development of communist guerrillas, in war against the South.

“This dioxin has a toxic power 13 times greater than civilian herbicides such as glyphosate,” recalls Valérie Cabanes, a lawyer in international law. “Agent orange” destroys vegetation, pollutes the soil, poisons plants and animals. The health consequences for the population (cancer, malformations) are still felt today. Four million people have reportedly been exposed to this herbicide in Vietnam, Laos and Cambodia.

Supported by many associations, Tran To Nga, now in the seventies, filed a complaint in 2014 against 14 companies that produced or marketed this chemical compound, including Monsanto (acquired in 2018 by the German Bayer) and the American manufacturer Dow Chemical.

A fight for millions

“The recognition of Vietnamese civilian victims will set a legal precedent” if the responsibility of multinational companies is established, says Valérie Cabanes. In fact, only American, Australian and Korean veterans who fought in Vietnam were compensated during trials between 1987 and 2013.

“I’m not fighting for myself,” said Tran To Nga, who suffers from type 2 diabetes, tuberculosis and cancer, but “for my children” and “the millions of victims.”