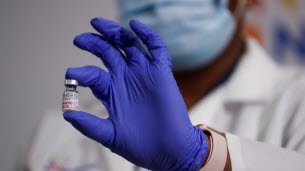 Zero points: this is the score for France, compared to the main countries that have started the vaccination campaign in recent weeks. With 516 people vaccinated, almost as many as Latvia (for 34 times more inhabitants), France is a red light. By comparison, most European countries have already vaccinated thousands of people, and some even hundreds of thousands.

In fact: a campaign that starts late compared to other countries, such as the United Kingdom, which began vaccinating on December 8. Or the United States, on the 14th. In France, the first injection was made on the 27th between Christmas and New Year’s Day. The low availability of doses (production is at full speed, but the whole world is waiting) and a certain formalism (collection of consent, individual interviews, etc.) are slowing down France a bit more.

Nearly one million vaccinated across the channel

With almost one million doses of the Pfizer-BioNTech vaccine delivered, the UK is undoubtedly the European champion. During the Christmas week, 43,000 Britons were vaccinated every day. A figure logically led to an increase with the green light that the health authorities gave the AstraZeneca vaccine this Monday.

The United Kingdom is the first country in the world to have approved these two vaccines. But for some researchers, we still have a long way to go: to avoid a third wave, two million people should be vaccinated per week, points out a recent study from the London School of Hygiene and Tropical Medicine (LSHTM). Currently, around 1.39 ‰ of the British population has been vaccinated.

Over four million doses distributed in the United States

Elsewhere on the old continent, no other country comes close to this score. Germany has only delivered almost 240,000 doses, but the campaign is gaining momentum: the number of people vaccinated daily jumped from 20,000 to more than 30,000 last week.

Figures that stand in stark contrast to the inertia of the French vaccination campaign, while the vaccines were approved simultaneously in all EU countries.

China and Russia, which have developed their own vaccines, claim to have distributed 4.5 million and 800,000 doses, respectively. According to the latest available census, over 4.2 million people have already been vaccinated in the United States.

But the best student is still Israel, engaged since December 19 in a mass vaccination campaign. Prime Minister Benjamin Netanyahu had also set an example by being the first to be vaccinated. Over the course of two weeks, around 1.2 million people (out of around eight million inhabitants) received the vaccine developed by Pfizer / BioNTech. At this rate, the Jewish state could achieve collective immunity in just a few weeks.